Mining was a physically demanding job.

However, the tasks that the miners had to complete during the day did not only require a lot of physical strength but also a combination of precision, patience, and solidarity towards others. 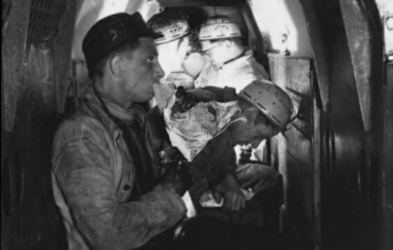 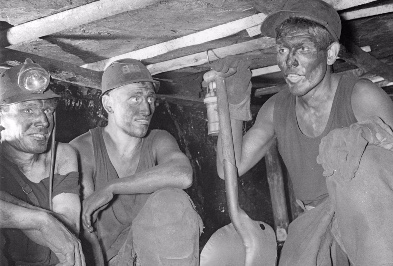 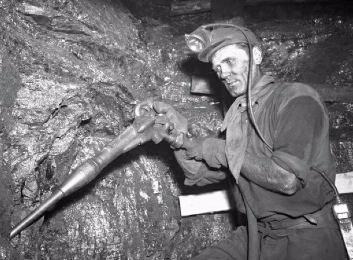 During their shift, the miners were working intensively and for long hours. They were not allowed to go back on the surface until the shift was officially over. Short breaks were allowed, but they could only be taken underground.

Try to imagine being in a closed space for 8 hours straight, without seeing the daylight or breathing fresh air…

Underground the miners carried out a variety of general duties. Some of the most important tasks consisted of:

To efficiently perform the different tasks, the miners used a variety of different tools.

The Soar was one of the first objects that the miners used to break the stones and dig holes. This tool was then substituted by the Drill.

The first drill was invented in 1806 and was powered by a steam engine. Later on, pneumatic drills were developed. The types of drills used by miners only used compressed air as a power source.

The Pneumatic Drill, also known as Jackhammer in American English, was developed after the soar for the same purpose: breaking the rocks. The drill, however, allowed the miners to work easier and faster than the soar.

The tool operated by driving an internal hammer up and down. The hammer was first driven down to strike the rock and then back up to the original position to repeat the cycle. To use this tool effectively much force needed to be applied by the miner.

Explore the 3D Model: This object belongs to the collection of mining tools at Nederlands Mijnmuseum in Heerlen. Take a closer look at the object by clicking on the annotations on the model.

Rotary Hammer by 3dnederlandsmijnmuseum on Sketchfab

Why use an air-pressured system?

The objects used to break the stones were working through an air-pressured system.

Steam engines could were inadequate for the mines for multiple reasons: they needed fires to operate and in the mines the ventilation system was inadequate to vent the fires’ fumes; there was also no way to convey steam over long distances, e.g., from the surface to the bottom of a mine; and mines and tunnels occasionally contained flammable explosive gases.

By contrast, compressed air could be conveyed over long distances without loss of its energy, and after the compressed air had been used to power equipment, it could ventilate a mine or tunnel.

After creating holes in the stones with the drill, it was finally time to use the Blasing Machine. This was a shooting device used to create great explosions underground so that the coal could then be extracted. This device had a dynamo on the inside which triggered the explosives in the mines. Only an authorised person (the Schiethouwer) could operate this device, because of strict safety regulations.

Explore the 3D Model: This object is located at the Nederlands Mijnmuseum, Heerlen (Limburg). To learn more about the object you can click on the annotations.

Blasting Machine by 3dnederlandsmijnmuseum on Sketchfab

The pieces of coal created from the explosion had then to be collected and carried upstairs. To do this the miners would move the stones on a Wagon, which would then be loaded on the elevator to reach the surface.

The elevator used for the wagons was the same that the miners would use to arrive and to leave the mine. Because of the elevator size and capacity, only one wagon at the time was allowed.

In order to carry the stones from on the wagon, the miners were using the Shovels.

This object consists of three main parts: the blade, the shaft and the handle grip. Depending on the use, some shovels had a round pointed blade, while others had a square blade. The handle grip, the part where the miners held the tool, could have a D-shape or a T-shape.

Explore the 3D Model: This shovel is part of the collection of mining tools held at the Nederlands Mijnmuseum in Heerlen. You can learn more about this object by clicking on the annotations.

Shovel by 3dnederlandsmijnmuseum on Sketchfab

Solidarity and Trust between miners were key to running a successful mine.

While working underground miners had to know they could count on each other.

When one of them was too exhausted to continue his task, someone else was ready to help him finish the job.

When a miner was in danger, his Koempels were ready to get him out of trouble!

Previous: Before Work
To the Collection
Next: Breaks