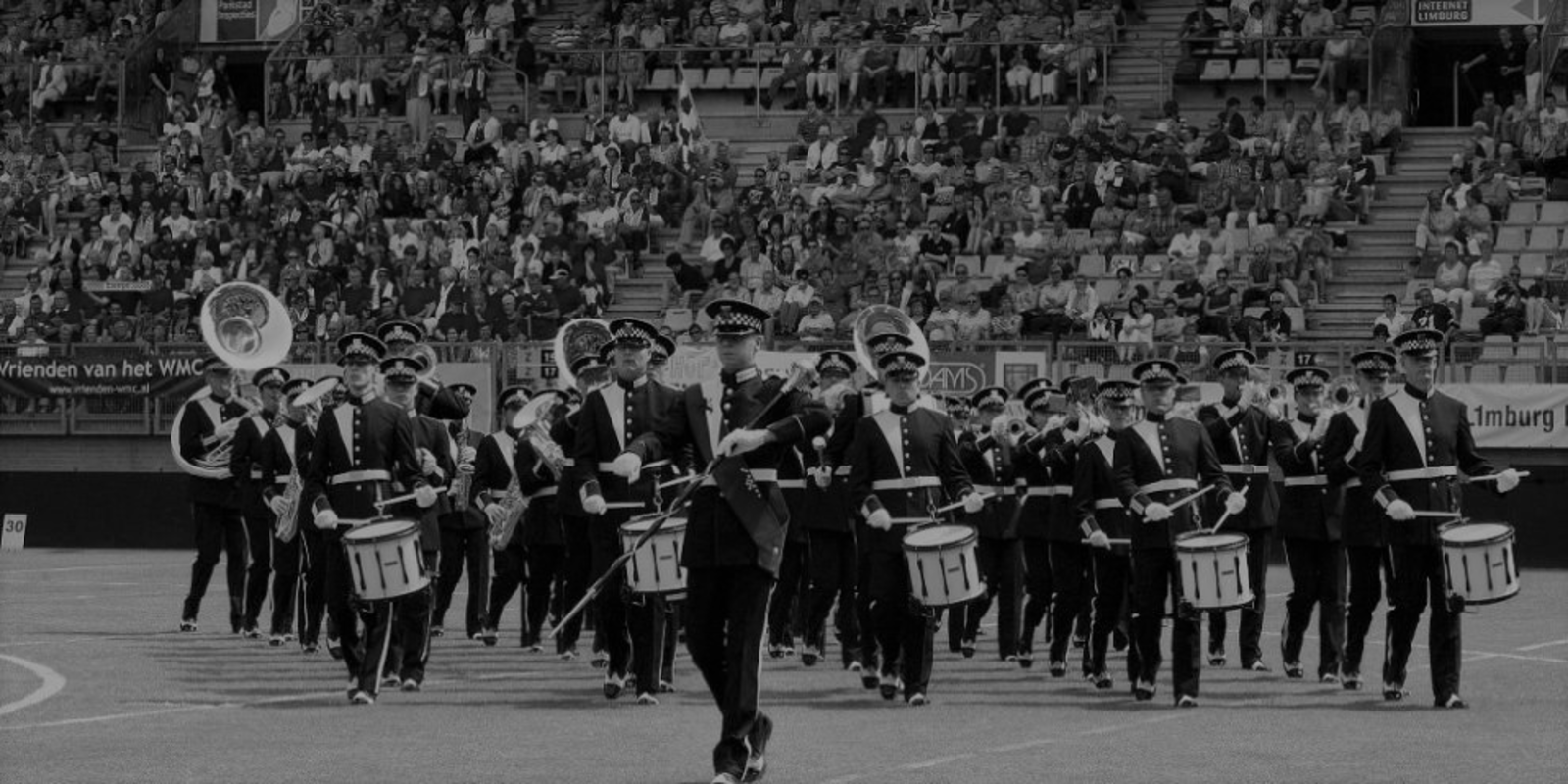 Music is deeply rooted in mining culture. For coal miners music was a way of relaxing from their hard work underground and strengthen bonds with their fellow workers. Wind bands were present in most ceremonies and events in mining communities such as anniversaries, funerals, and religious celebrations (Beijer, 2013; Langeweg, 2014).

The first band formed by miners in the Netherlands was the Nederlandsche Mijnwerkers Muziekvereeniging Bergcapelle (also known as Bergkapel) created in 1892 by miners of the Domaniale Mijn in Kerkrade. The band’s origin is not clear. Some say it was an initiative of the mine’s management, others say they were inspired by music companies in Germany. What is clear is that the Domaniale Bergkapel served as a role model for several other bands that were created at the State Mine Wilhelmina (1908), State Mine Emma and the Oranje-Nassau Mines (1914), the Willem-Sophia mine (1923) and Staatsmijn Maurits (1927).

The management of the mines encouraged and supported their companies’ bands since they were a good form of promotion for the industry and created a positive public image for the coal mining profession. For instance, the management of the mines allocated workers who were members of a “muziekkorps” into shifts that didn’t conflict with the band schedule so the musicians could practice and play in clubs without affecting their work.

"With alternating or continuous work, rehearsal and performance would be impossible, and for the mines, music was so important that a concession was made. This guarantee on working day shifts was the reason why many miners also wanted to get into the music companies."

Music companies were mostly identified by their extravagant uniforms. The Bergkapel of Domaniale was the first band formed by miners to wear uniforms during their performances, in a time when it was unusual to have non-military bands in uniforms (Langeweg, 2014). Indeed, at a performance in Antwerp in 1894, the Bergkapel was given a prize for having the most original costumes.

The Bergkapel uniform was inspired by the Bergfrack mit Schachthut, the traditional uniform used by miners in Saxony, Germany. The 3D model is a reproduction of the cap used by musicians of the Bergkapel of the Domaniale Mine. The hat is black with golden ornaments decorating the top edge and the left side, a golden button carved with the mining symbol is attached to the left side of the cap. In the first 5 years of the Bergkapel, only conductors and the directors of the Bergkapel were allowed to wear the cap with feathers. Around 1900, other musicians were allowed to wear white feathers while the board and conductors wore red feathers (Langeweg, 2014).

With the success of the Bergkapel and other bands of miners, wind and fanfare music became very popular among the miners’ communities in the Netherlands. After the Second World War, wind music reached its peak in mining culture with the creation of the World Music Contest (WMC), a one-month music contest that takes every four years in Kerkrade since 1951. The event was created, according to the organizers, after a joint concert of an English brass band and a Dutch band on a Sunday afternoon. However, only the Dutch band was supposed to play that afternoon, while the English joined them spontaneously. The crowd reaction was surprisingly good. Then, the idea of hosting a competition between wind musicians from different locations of the world was born. Kerkrade was the perfect destination, a city where the inhabitants breathed wind music. The WMC consists of music festival based on competitions between wind and fanfare bands, percussion ensembles, brass bands, marching bands, and conduc­tors. Also, orchestras, bands, and artists from several different locations performing across the city during the four-week festival. As the event grows along with the editions, so does the quality of the musicians and the experience provided by the organizers, making the World Music Contest a prestigious music competition. The best wind musicians around the world compete on the stage of the Rodahall or on the field of the Parkstad Stadium for the place of world champions. It’s basically the World Cup of wind music.

Nowadays, the WMC attracts hundreds of thousands of visitors to Kerkrade, who come to watch the marching parades and show contests, to listen to the orchestras and soloists, and dance to all different kinds of music, since it’s played by wind instruments.

The music scene in the mines didn’t only rely on parades and harmonies. Folk bands, such as De Vrolijke Mijnwerkers, were part of the mining culture in the Netherlands. Mixing festive melodies with the accordion, fast beats on the drums and the soundtrack of the underground mines, De Vrolijke Mijnwerkers produced several albums, achieved quite good success and sold 50.000 records in their first two years.

In 1962, the Billboard Magazine recognized the album “I Remember The Netherlands” from De Vrolijke Mijnwerkers among the International albums with sales potential (Photo: Billboard)

What draws the most attention from this band is that all three musicians had no past in the mines, but referred to the miners on their name and clothing. Actually, this takes place in the early days of the band, at one time when performing in a party for a crowd of miners, who enjoyed and cheered the performance quite loudly. At the end of the evening, the organizer of the event thanked and praised the musicians, comparing the musicians to the miners themselves and their music to what the miners usually appreciated. At that moment, the name was chosen and the band started to related themselves to mining and wear miners’ gears.

Check the videos below to listen to some of the songs from De Vrolijke Mijnwerkers.

Previous: Family
To the Collection
Next: Leisure Time