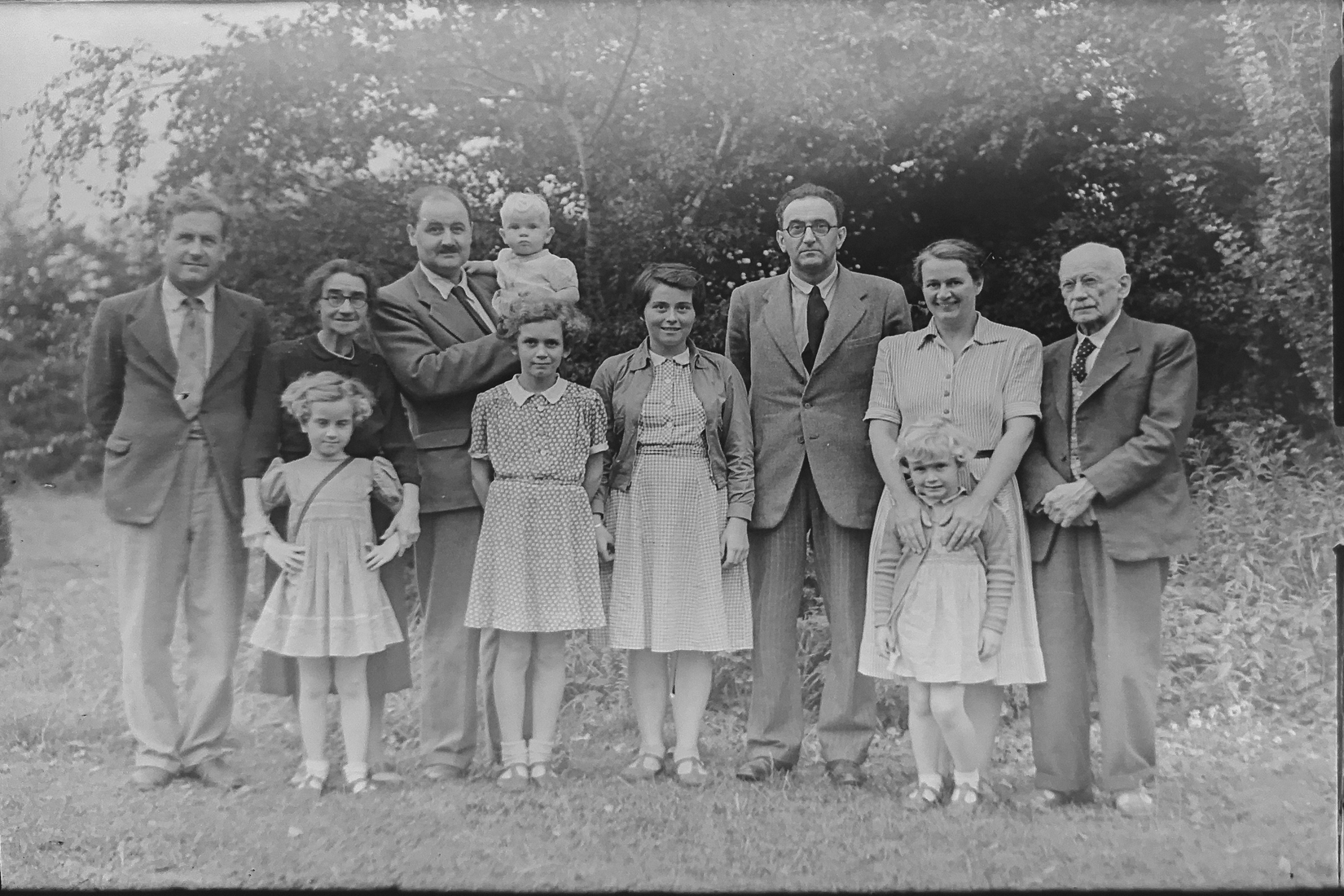 The miners were a tight-knit community, living together in mining settlements. The mining company provided housing for their employees and also supplied them with coal to heat their homes. Without modern conveniences like microwaves, the wives had to be creative in their household management, for example finding ways to keep food warm. Before washing machines were available, the laundry had to be done by hand (Weber, 2018). The houses were cottages with small gardens. A miner’s wife recalls how important animals were for the families. Many miners’ kept pigs and chickens for themselves. They used their gardens to grow fruits and vegetables with their own produce forming a big part of their diet. They grew apples, plums, potatoes cabbage and nuts. The miners ate whichever vegetables were in season (Weber, 2018).

"We were basically living out of our garden."

"My husband Frans was always enthusiastic about his work as a miner. He told me stories about his work so I became curious. I was able to visit him underground twice, on the 250m and 340m deep floors of the Oranje-Nassau mine I in Heerlen. This gave me an understanding of the gravity and responsibility of his work."

Besides visiting their husbands underground, the wives also went to the mine on payday

as they wanted to make sure their husbands brought the wages home which not all of them did.

and she also found bottles of liquor in their house that he had been trying to hide from her (Weber, 2018). 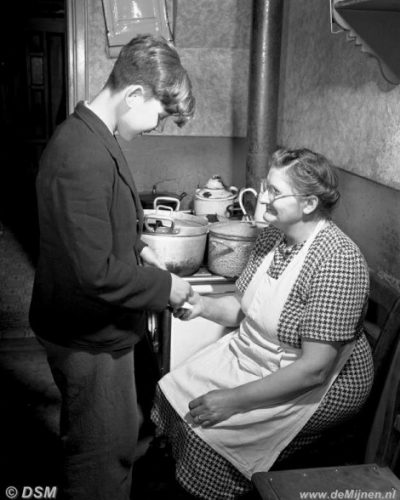 A young miner brings his wages to his mother

"My children were still young when the mine closure was announced in 1965 and we realized that there was no future for the mining industry. They became entrepreneurs instead.”

Wife of a former miner

“After his training as an underground supervisor, we got married in 1964. I myself was an independent entrepreneur as well as the mother of three children. I also had time for my hobbies."

“For my own peace of mind I was glad that the mines closed, but I do realize that this has been disastrous for our region.”

This biscuit tin is a souvenir from the 1950s. Pictured on the lid are the aboveground buildings of the Heerlen mine which was managed by the mining company of Oranje-Nassau. They were the largest private mining company in the Netherlands supplying about 20 percent of the total Dutch coal production. The Oranje-Nassau mine I in Heerlen was the oldest and second largest of the four mines the company owned in the area. It operated in Heerlen from 1899 until 1974. Close to the mine, there were several coal washing plants and a large electric power station. The mine dominated the skyline of Heerlen with their tall chimneys. In 1953 the mining company employed more than 8,000 employees.

Explore the 3D model: Click on the model to view it in 3D, rotate it, and see the annotations.

"For girls, there was a problem that except for the mines, there were not many workplaces for them. So, like their brothers they would go to primary school and when they were 14 years old, they would either help in the household or try to find a job, possibly in the textile sector. They were also marrying, often miners as well."

"The wives would wash the clothes and prepare food for the miners going underground. Not only their husbands but also their sons could be miners. The boys would become miners after they finished school. Until they were fourteen years old, they would go to primary school. Afterwards, they would go to Vocation School and learn about mining practices."

"The wives would meet and hang out together. They had in common that all their husbands were miners, working underground. So the wives all shared the fear of an accident happening in the mines."

In the middle ages, about 30% of miners in Europe were female. They were mainly working aboveground and performing tasks such as cleaning, crushing, and sorting of ores; hauling and carrying coal and operating bellows, and reel elevators (Feichtinger, 2018). In the 16th century, male miners were worried that women would take over their jobs. The reason for this was that female miners were only paid one-third of the wages their male colleagues got for the same work.

After a wave of industrialisation and the flourishing of coal mining in Europe, women did not work in the mines in the Netherlands, only long before the 1850s in family mines. Instead, they took care of children, worked in the administration, cleaning, and health departments (Kift & Kassel, 2018). In Limburg, women were employed, for example, in the administration of the mining police.

Besides having secretarial or administrative jobs, women also supported mine workers by cooking multiple times a day for different men who had different shifts in the mines. Through giving birth to and raising many children, working hard managing their families, running the household, and supporting the miners, women played an essential part in mining history. 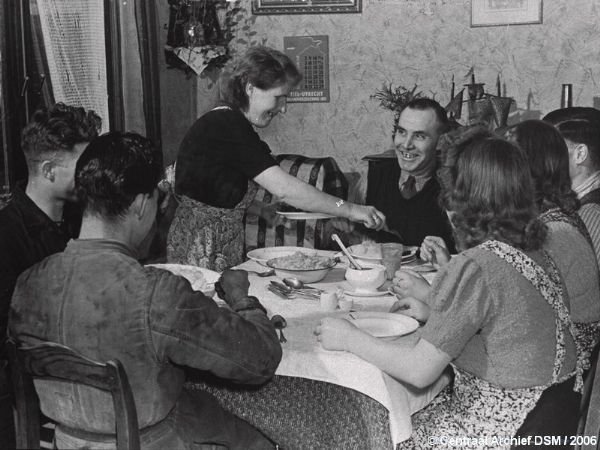 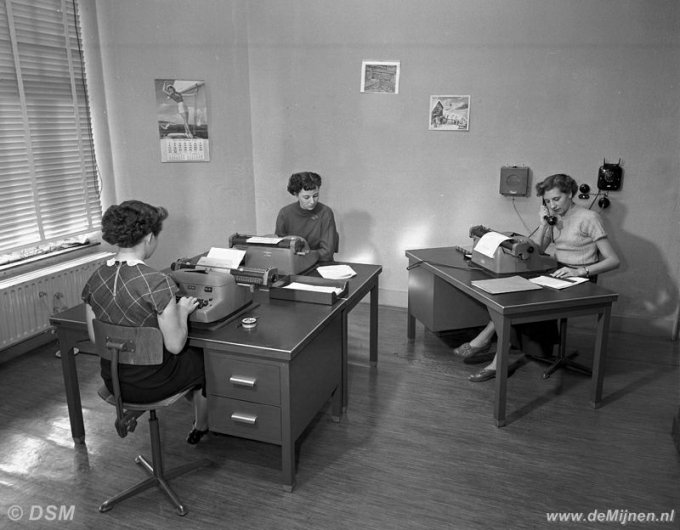 In Limburg, women worked in the administration. This is the photo of secretaries at the mining police office of the Staatsmijn Emma in Heerlen

Previous: Mining Culture
To the Collection
Next: Music