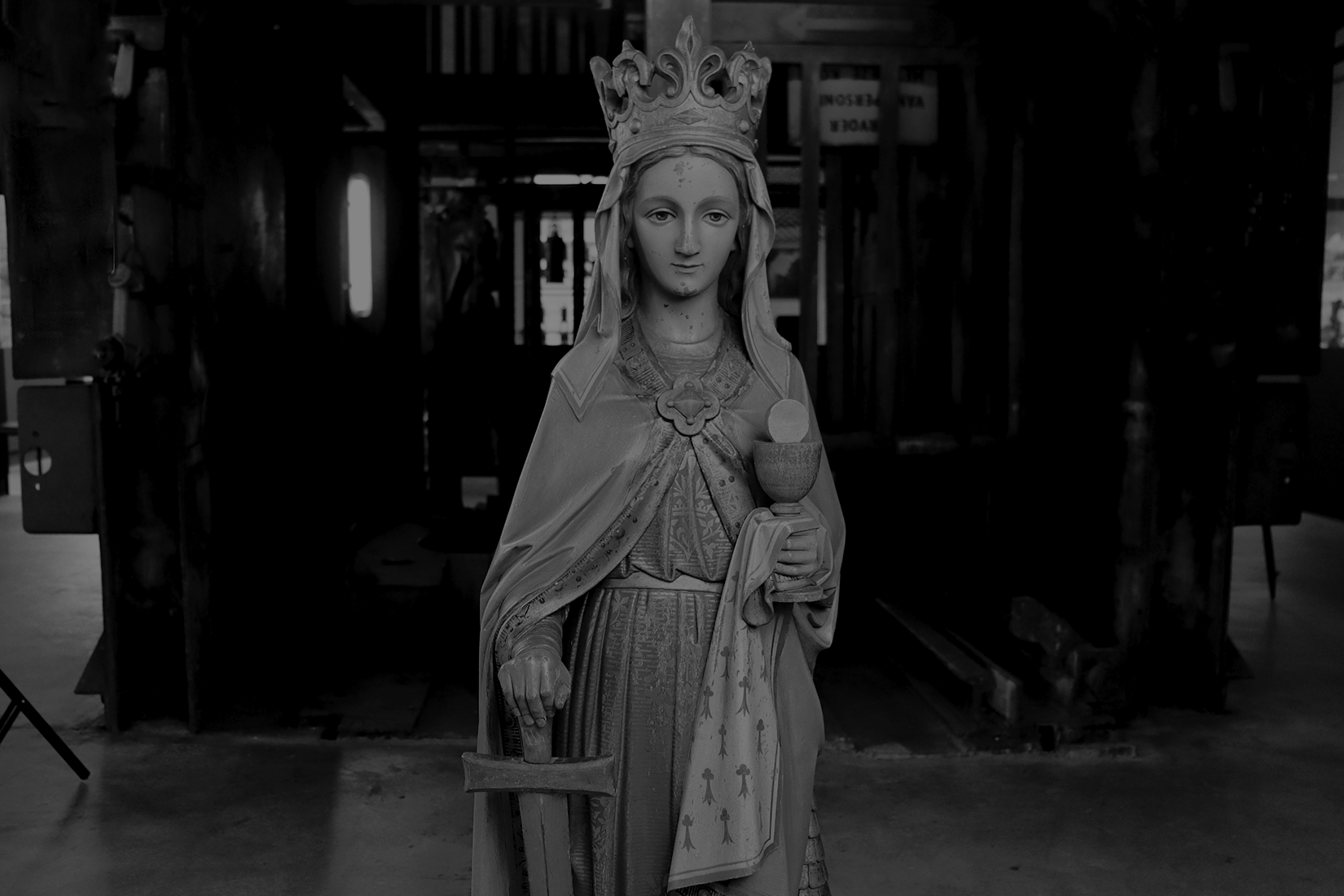 The history of Saint Barbara

Discover the history of Saint Barbara and learn with 3D models about her significance for the mining culture in Limburg. First, have a look at the general history of the Saint.

Saint Barbara is a religious icon for miners, tunnel builders, artillerymen and all those who work with explosives. This goes back to her legend, which says that she was killed by her father because of her Christian faith. He was struck by lightning immediately after his cruel deed.

The historical existence of the saint is doubted because of the great gap between her alleged lifetime in the 3rd century and the appearance of the first reports about her in the 7th century (“Saint Barbara”, 2019). Nevertheless, martyr worship began in the 9th century in the Catholic and Orthodox Churches (Kirsch, 1907). As one of the Fourteen Holy Helpers, she was invoked against thunder, lightning, fire, and sudden death based on her legend (Encyclopedia Britannica, 2020).

Since the 17th century, Saint Barbara has been the patron saint of people who dealt with explosives and gunpowder (Langeweg, 2012). In the mid 19th century, miners began to use explosives to break and shatter the rocks underground. It was at this time when Saint Barbara became their patroness.

In 1969, her official feast day on December 4th was removed from the church calendar for the vagueness of her historical life (Shaver, 2018).

Despite this, Saint Barbara is still considered a key figure in the mining cultures of many countries.

The Worldwide Recognition of Saint Barbara

Sit back, play the audio and explore artifacts of Saint Barbara across the globe. Click and hold the mouse button to move the 360° map.

The trajecory of a Saint

How Saint Barbara Came To Limburg

In the Dutch region of Limburg, Saint Barbara only began to be immersed in the mining culture when the mines came into existence in the early 20th century. She was introduced as the patron saint by foreign miners from Slovenia and Poland who came to the Limburg mines around Heerlen and Kerkrade between 1900 and 1930 (Langeweg, 2012). The foreign workers also founded associations named after the saint. These associations were established to support each other as well as to bring the culture of their homeland to their new place of living (Langeweg, 2012).

Over time, Saint Barbara became an integral part of everyday mining culture. There were celebrations to worship her, schools and hospitals were named after her and, in many mines, shrines with statues were built in front of which the miners prayed for a safe return from work. Injured miners even received gifts in honor of the saint (Januarius, 2009, p. 54).

Explore the 3D Model: This marble statue (unknown artist) was first placed on the facade of the OVS of the ON3. Take a tour by clicking on the annotations on the model and find out what happened next.

The feast day of Saint Barbara is December 4th. In Limburg, this was one of the most important holidays of the year. After the Second World War, it became an official holiday and all miners had time off for this special occasion (Langeweg, 2012).

Click on the video to hear about the feast from Nico Maar, a former miner.

An Object of Veneration

When Saint Barbara’s Day is celebrated today, the former miners in the old mining area organize a memorial service for the deceased miners in the memorial chapel in Terwinselen (“Het Barbarabeeld”, 2012). Afterwards they have coffee and talk about the old times.

This beautiful 1.15 m high wooden statue (J. Thissen & Son,1909) is part of these ceremonies. It represents the presence of Saint Barbara during the holy mass. The saint is addressed in the prayers and songs of the community.

The statue once belonged to the state mine “Emma”, which was closed in 1973.

Explore the 3D model: Get more information about the statue by clicking on its annotations. You will find out more things about its current location, and its traditional use in the memorial services on Barbara’s Day on December 4th.

Time to Test your Knowledge

Previous: Saint Barbara
To the Collection
Next: The Meaning of St. Barbara